The positive impact of the EU felt across the Highlands 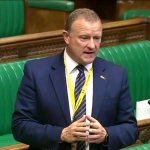 Impact of the EU: Investing where Westminster had failed

We are just a few of days away from the European elections and nearly two months since the supposed exit date of 29th of March and we still don’t have answers from the UK Government to key questions about Brexit.

For instance, last week I took part in a debate on the Government’s, much vaunted, replacement for the European funding our region has received for decades through our membership of the EU.

According to independent estimates, the Highlands & Island economy is set to lose over 160 million pounds of investment between 2020and 2027. This is money that matters to the Highlands and investment that has already made a significant difference in our communities. The most iconic reminder of that investment is the Kessock Bridge – with the EU investing where Westminster had failed.

Time and time again, we have heard the UK Government promise this money would be identified, then late last year we were told to expect a consultation on the fund soon. Yet, here we are months on and they can’t even give a date for the consultation, never mind assurances that measures will be put in place to protect this funding.

Meanwhile, charities, community groups and our public sector are facing enormous pressure to identify future support, some are closing their doors due to financial uncertainty.

What’s worse is that the UK Government have put the “Prosperity Fund” under the control of the England and Wales only ministry for Communities and Local Government, barely even trying to disguise the blatant power grab from the ScottishParliament who administer EU funding.

Even Scottish Tory MPs, trying vainly, to allow the UK Government Minister to at least give them something they could use to defend this process were left exasperated by the sheer unwillingness of their Minister to clarify or deny what members from all other parties in England, Wales and Scotland were pointing out.

An overwhelming majority of Scotland’s voters voted to stay within the EU, including all 32 of Scotland’s council areas. Throughout this Brexit process, Scotland’s people, Parliament and Government have been ignored, with only the tories trying to say otherwise.

In the SNP, we are pointing out that this week’s vote is your first chance, since 2016, to say no to Brexit and to send a message that Scotland will not be ignored by Westminster.