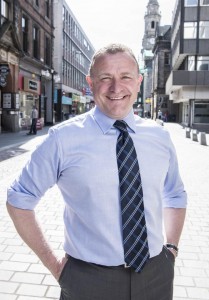 The Scottish Government has already shown ground-breaking ambition by committing to deliver next generation broadband to every premises by 2021.

I believe that here in Inverness, one of the fastest growing cities in Europe, we have the potential to improve our internet speed even further.We have the opportunity to join capital cities across Europe with reliable and future-proofed networks delivering internet speeds for tomorrow’s needs. We are so often at the back of the queue for internet and mobile connections and, too often by the time we get it, the world has already moved on.

I want this to change. It’s time for us, as the capital of the Highlands, to take the lead and become the next Gigabit City.

We all know the wide ranging benefits that improvements to our connections to the rest of the world bring to the Highlands, whether it’s the dualling the A9 or the direct connections to Heathrow and Schiphol. Having world class digital infrastructure is just as important. Becoming a successful Gigabit City could give us the opportunity to redirect other funding into much need broadband projects in surrounding towns and villages.

Bristol, one of the Cities to already take charge and declare themselves a Gigabit City, now boasts speeds of 1000mbs, on average 100 times faster than that the previous broadband speed.

With a similar ambition, Inverness would become a much more attractive place to do business, bringing a wealth of jobs in the fast growing Digital Economy.

Good internet improves all of our lives, it helps us stay connected with families’, lets us enjoy our music, favourite TV programmes and do our shopping. It improves the way we run businesses, allows us to provide medical services across the Highlands and transforms the way we deliver education. Yet is still much more than that. World class internet will make this a welcoming city for young people, create jobs and opportunities and put Inverness well and truly on the world map.

We have recently heard that Inverness is the fourth most visited city in UK, Inverness is now ready to be the best connected. I hope everyone joins me and gets behind Inverness, Europe’s next Gigabit City.