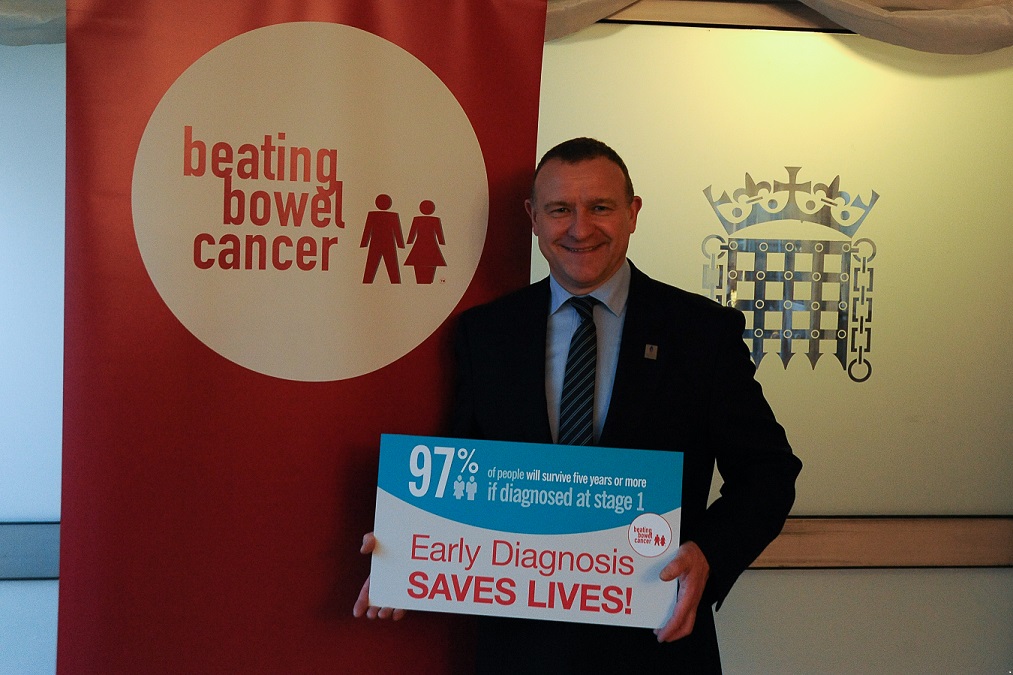 The MP for Inverness, Nairn, Badenoch and Strathspey joined other Members of Parliament, bowel cancer patients and survivors, health professionals and members of the charity to hear more about how improving earlier diagnosis of the disease can increase survival rates.

Bowel cancer is the UK’s second biggest cancer killer but this doesn’t have to be the case; if caught early over 90% of those diagnosed can survive more than five years. That figure drops to just 7% if they are diagnosed at a late stage.

Drew Hendry MP said: “It was good to hear about Beating Bowel Cancer’s plans for the future and I was pleased to pledge my support for them.  We all need to do our bit to keep bowel cancer at the forefront of the agenda and to ensure that the Government focuses on increasing efforts to improve early diagnosis rates, if the disease is to become a rare killer rather than one of biggest cancer killers in the country, as it is today.”

He said: “Sadly, my dad died of bowel cancer so I know just how vital it is that people are aware of the disease and its symptoms. If they know what to look out for, they can get checked out as early as possible.  This could save their life – but only if followed by an earlier diagnosis and quicker treatment.

“Prompt diagnosis and treatment of bowel cancer must be a priority for the NHS if we are to save more lives.”

Mark Flannagan, Chief Executive of Beating Bowel Cancer, said: “This event made it possible for us to share our plans and outline the key policy priorities that need to be realised in the next Parliament if bowel cancer survival rates are to improve.

“We were pleased to have the opportunity to highlight these issues to those with the power to help tackle them and are very grateful to Drew Hendry MP, for his interest. We look forward to working with him in the future to help raise awareness of bowel cancer issues in Inverness, Nairn, Badenoch and Strathspey.”

To find out more about bowel cancer please visit the charity’s website www.beatingbowelcancer.org or call their Nurse Helpline on 020 8973 0011.