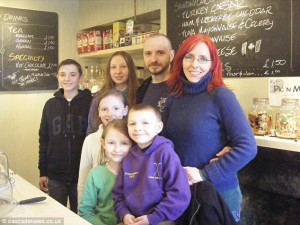 SNP MP Drew Hendry has said that the UK Government’s ‘one size fits all‘ immigration policy is failing the Scottish Highlands, as another family faces deportation.

There has been a long running campaign to allow the Zielsdorfs – a Canadian family based in Mr Hendry’s constituency – to remain in Scotland despite the Home Office’s determination to expel them and deport them to Canada over a visa technicality involving an employment regulation.

The Zielsdorfs have invested in a thriving local business, have contributed to the economy and have raised a family in the village of Laggan – but in February this year they were told they were no longer welcome and are under constant threat of deportation. The Home Office have cancelled their driving licences and have threatened to freeze their bank accounts.

The Home Office Minister responsible  James Brokenshire has refused to even meet Mr. Hendry to discuss this case.

“The Zielsdorfs are yet another family caught in the trap of the one size fits all policy which has no bearing on the needs of Highland communities.

“Instead of getting the credit for their contribution and for creating business and opportunity in a small, rural village, the family have been obstructed at every stage of their application.

“Even when they have fully cooperated with the Home Office, they are made to suffer the indignity of having their papers removed including their driving licences.

“Laggan is a very rural community and the family are having to rely on their neighbours to give them lifts so they can make the 20 mile round trip to the nearest shops. The family have been left in an unacceptable position.

“I’ve already raised this issue with the Prime Minister who failed to look into the case as he promised. It is time that the Home Office looks at this family as human beings rather than slavishly applying rigid rules that simply do not work.

“It beggars belief that the Home Office refuses to meet with me despite the obvious unique circumstances of this family, who are valued members of the small, rural community of Laggan.”