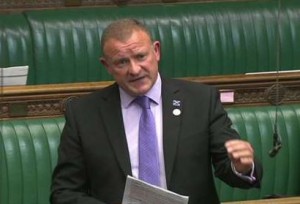 The SNP are today commenting on an interview by Iain Stewart, Tory MP for Milton Keynes South and PPS to Scottish Secretary David Mundell – in which he said that SNP MPs could be excluded from key votes on any Parliamentary legislation concerning the building a third runway at Heathrow Airport. He confirmed they could be considered an English only matter in any votes at Westminster – under the new EVEL proposals for English votes for English laws being brought forward by the Tories.

‘’These remarks about the third runway at Heathrow are extraordinary and emphasise the incoherence of the UK government’s proposals on EVEL.  Heathrow is constantly being promoted by the UK government as a national infrastructure project – with huge ramifications on air connectivity for Scotland, Wales, Northern Ireland and the regions of England.

“It will involve a minimum of £5 billion of public spending – and it would be completely absurd and totally unacceptable to assign it as an English only issue- as Iain Stewart appeared to be doing.

“Absurd because the UK government would then be at the mercy of rebellious Tory backbenchers like Zac Goldsmith and unacceptable because it demonstrates that the Tories’ proposals  – which clearly have an overwhelming impact on all four nation of these islands – are being treated  as something for English MPs only.”