It was a great pleasure to be asked to present the Highland Third Sector network awards. These events are not only important, put on with enormous dedication and enthusiasm by Mhairi Wylie and her team at Highland Third Sector Interface, but are also occasions of great humour and are thoroughly enjoyable.

During my introductory remarks I reflected on the fact that, as elected representatives, we often depend on voluntary organisations to provide the assistance to those who come to us in need. A fact underlined by Scottish Council for Voluntary Organisations figures; in 2015 more than 8 out 10 Scottish households used a charity for one reason or another, 34% of households were actively helped by them and, in return, 9 out of 10 people in Scotland supported a charity.

I have fought the austerity dogma of the present and previous UK governments and I believe that their ideological approach has left too many behind. Often in circumstances that have no place in the 21st century, let alone in a first world economy.

In pursuit of this policy, they have left a legacy that has seen a meteoric rise in the need for food banks and an increasingly stressful and damaging series of life choices for people to make. Often for those who already face severe challenges through disability or through a lifetime of deprivation. This is further compounded in largely rural areas, such as ours in the Highlands, where many also suffer form higher energy and transport costs.

The Scottish Government has sought, wherever the power exists, to assist those trapped by the UK government’s austerity policies. They have provided funding to mean that none of our citizens need to pay the loathed “Bedroom Tax” as well as a range of universal benefits such as; free prescriptions, free bus pass for older people, the Council tax freeze (continuing on all but the highest bands) and many more – right down to free parking at Hospitals. All designed to make life a bit easier for those squeezed.

But it is the work of the third sector, those voluntary organisations working alongside the public sector and the private sector that provide direct help and are the human face of caring in our communities and beyond. They give of their time and their compassion; to support, to lift, to empower and to improve the health and well-being. Not just of those in need but to the benefit of all of us and our environment.

Their boards are unpaid. They are independent of government and they are not driven by profit or run for private gain. If a profit is made, it is always re-invested back into the organisation and its work and the range of activities undertaking is incredibly diverse, from social care, health and mental health services to employability and a lot more besides. They touch lives, often they save them.
I have included the list of all those fine people I had the pleasure of giving awards to and shake the hands of these heroes of ours, but in addition I want to highlight one contribution.

A “Thank you” written to be read out at the awards because the recipients couldn’t attend – Francis and Andy – no, they were busy working for others, this time in Chios, Greece stepping out of the Highlands to support those even more in need. This is what they wrote:
“We are very sorry that we cannot be with you tonight, but we have returned to Chios where there is still so much to do. We have asked our good friend Calum to accept this award on our behalf.

We are incredibly honoured by this recognition from The Highland Third Sector Interface, which is made up of so many committed and hard working individuals who all share a passion for what they do.

We have both been lucky enough to work in the voluntary sector in Highland as well as in volunteering in Rwanda and now in Chios. In all of these roles we have been able to work with great teams and individuals from whom we have learned so much.

The Highlands Supports Refugees group started us on this journey when they sent two containers of donations out last December. We went in January to meet the containers. One month later we realised how much Chios had got under our skin. Currently THSR are aiming to send 5 pallets of donations to Chios next Monday. There’s been an incredible effort from people all over Highlands and Islands which has led to donations being sent to many different places including Lebanon.

The volunteering work that we are presently doing is the most challenging thing we have ever done. Unaccompanied minors have either been detained or abandoned in Chios since the 20th March when the deal between Turkey and the EU was agreed. We try to do what little we can to support them but are powerless to stop them walking into the arms of traffickers who promise them a bright future when all around them is bleak.

Boats of refugees are still arriving on a daily basis, and what strikes us the most, whether meeting boats as they arrive, working in the camps, or supporting the unaccompanied minors is that these are such ordinary people. Teachers, pharmacists, IT experts, mothers, fathers, children united by their need to escape the violence in their own countries. Many scarred by their experiences and struggling to know what their futures hold.

Thank you all very much for your support and recognition. It means a great deal to us both.”

These words brought tears to many eyes in the room as it was read out by their good friend Calum. That they should be grateful for being thanked without ever seeking it is truly humbling. But then, there are many amazing people, and because of the sheer number, most don’t get awards in our Third sector. All of them, however, deserve our gratitude. 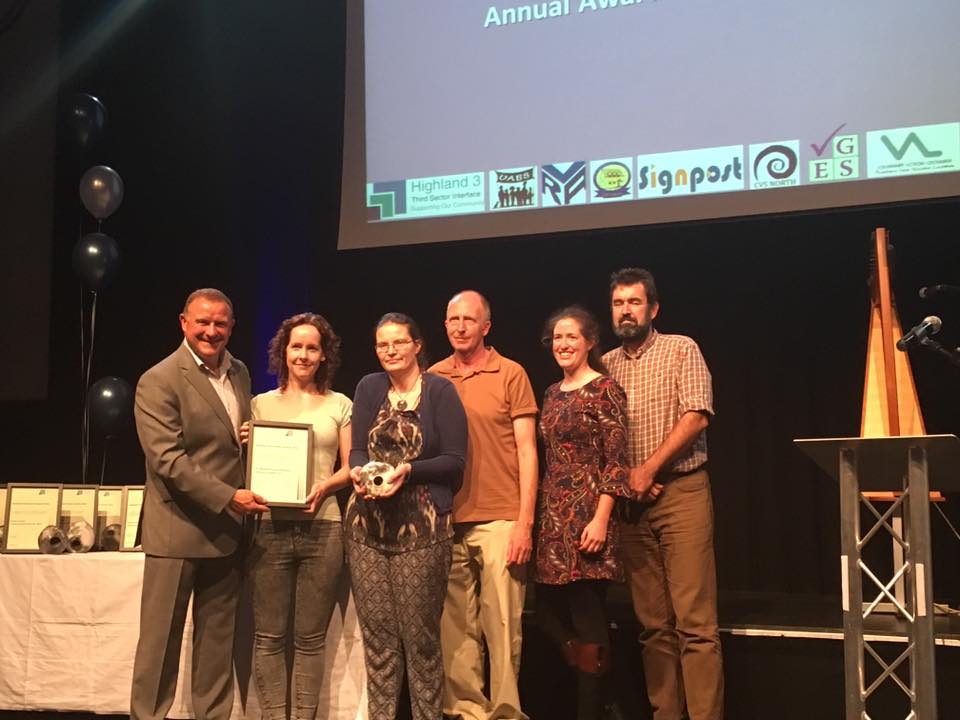 List of Award Winners for 2016 (for more information see http://www.highlandtsi.org.uk/awards-2016.html):

Additionally the Highland Third Sector Interface will recognise:
Kathryn Talbot Heigh for her outstanding contribution as a member of staff within the Third Sector Interface.
Also in recognition of their support for the refugee resettlement activities that HTSI has been involved in, the following groups will receive a joint recognition award as the HTSI Partner of the Year 2016:
The Highlands Supports Refugees