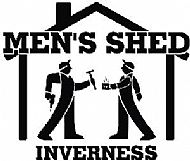 In addition to being at Westminster, my normal week involves criss-crossing the constituency, hosting a raft of advice surgeries and listening to, and helping people.

Last week, Parliament wasn’t sitting, so I had a bit more time to spend visiting constituents. These are the times that I often find amazing groups and people helping others, such as, Alan from the “Men’s Shed”.

Alan Michael sat behind a makeshift desk at the men’s shed and told me of his ambitions, not for himself, but what he and his band of friends could do for others…

He is described by the men that go there as “The Leader”- said with a laugh but also with genuine warmth and respect.

We were crammed into a tiny room in the “shed”, I had to move a precariously balanced pile of odds and ends to free up a chair.

There was, what some people might describe as junk, just about everywhere. To Michael and his colleagues, however, what surrounded us was opportunity. They will recycle this. Use it to help and create. Nothing goes to waste and they are grateful for the donations.

The Men’s Shed has been going for some time and, in short, it helps men to get together. They work to turn problems into positives. Some of you may be aware of a number of interventions to tackle loneliness and despair amongst those who find themselves isolated. Grass roots initiatives such as Mikeys Line, helping people, often young men, by providing someone to talk to when their own, personal, endless night seems overwhelming in its darkness. Recently, I went along to support a “Reach Out” Café, run by the children at Drakies Primary school, this specifically aimed at bringing their community together and providing a break from loneliness.

The Men’s Shed is another of those gems. Widowers, men who might otherwise not be able to make new friends, as others pass, or might have felt the time to learn new skills were in the rear mirror of past decades, go and find a place where they are welcomed, valued and are part of a team. There is no pressure, they gain from just being there, out of the house, amongst peers that they might never have known otherwise.

During my visit we all paused to admire an enormous picture frame, big enough for a family to stand in. It was being built for Culloden visitor centre. There will be lots of fun snaps taken by families and groups of friends as they get dressed up in period clothes to get their pictures taken behind this beautiful piece of craftsmanship.

Most of the tools used by the ‘Men’s Shed’ are donated and it was certainly evident from my visit that they are used with care and skill. Simply put, they use them to build strong things with wood and metal. Like the other incredible people that I have the privilege to meet during the course of my duties working for you, they also strengthen our communities. There is, after all, nothing that makes a person stronger than helping others.