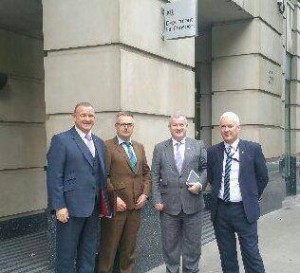 SNP MPs have asked the Transport Minister to tackle Highlands & Islands maritime safety deficit ahead of the forthcoming spending review. At a meeting with the Robert Goodwill, the Highland & Islands MP’s reiterated serious concerns about the removal of the second ETV in Stornoway and sought commitment from the Minister that action would be taken to ensure the safety of the waters in the region.

The issue has become further exasperated as the Kirkwall vessel is only funded until March 2016. The UK Government has yet to make a commitment to retain this vessel beyond March.

“The UK Government cannot simply ignore the dangers of leaving the Highlands and Islands without effective and deployable towing cover. We have been very clear that our waters need protection and towing capacity on the West Coast in addition to the Emergency Towing Vessel stationed in Orkney.

“I feel sure that we have conveyed the strength of feeling of the people, the community leaders, Council leaders, MSPs and now our MPs across the Highlands and Islands. It is now up to the Minister to prove that he has listened.”

“It is not acceptable that with the volume of seaborne traffic on the West Coast that we are left without appropriate safety tug facilities. It is essential that the UK Government accepts its responsibility for safety in the west coast by providing an emergency tug vessel based at Stornoway.”

The need to reinstate adequate emergency provision has been demonstrated many times, and was evident just over a year ago, when the MV Parida caught fire while carrying a shipment of nuclear material from Scrabster to Antwerp.

There was significant concern as the vessel drifted towards the Beatrice oil platform off the coast of Wick and the oil platform had to be evacuated. Had the owners of MV Parida not secured a commercial tow to the Cromarty Firth the consequences for the environment and local communities could have been devastating.

“The prospect of radioactive waste from Dounreay being transported by sea around Scotland’s coast without adequate support from Emergency Towing Vessels is a matter of enormous and immediate concern to communities in Caithness, Sutherland and Easter Ross, and elsewhere. The consequences of a simple engine or steering failure in any vessel carrying nuclear or other highly contaminated waste could be catastrophic for both the environment and indeed human life itself. The UK Government cannot responsibly continue to claim that stationing one Emergency Towing Vessel in the far north is adequate.”

Long-time campaigner for the reinstatement of the ETV, Angus Brendan McNeil, MP for Member for Na h-Eileanan an Iar added:

“It is vital for our maritime insurance policy around our coasts that we have a ETV or Tug on the West Coast. This is a transport related priority for Highland SNP MPs it is unfortunate that this is a power not in Scottish hands but the Westminster Tories”

These comments were echoed by Brendan O’Hara, MP for Argyll and Bute who added:

“For too long the UK Government has not taken its maritime responsibilities in Scotland with the seriousness it deserves.”